THE ROAD TO RECOVERY:  HOW JAPAN, NEW ZEALAND AND CHILE MEET THEIR DISASTER CHALLENGES

Common elements exist in the recovery paths chosen by these countries. All utilize the ability of central government ministries for recovery implementation, with New Zealand being the most centralized. Local government is needed to address specific land use issues and citizen input. Disaster reduction is now considered to be a central reconstruction planning principle, with Japan being the leader in its implementation.

Recovery from a large disaster event is a complex process. It involves helping victims get new shelter, return to work and to make many personal adjustments. It a process of life recovery, where what was the past no longer exists and what is the future depends on many decisions made by people.  In this way recovery becomes a partnership, however unequal between the survivors (people and small businesses) and government.

This article examines the ways these three countries have chosen their path to recovery.  The countries are Japan, Chile and New Zealand.  What they have in common is that they have suffered their largest disaster event in modern history during the years 2010-2011 starting with an earthquake.

What caused the disaster and what was its impact?  Table 1 provides comparative information on the three countries directly related to the event. The administrative recovery organization is shown in Table 2.

Japan with its nuclear accident faces the most difficult challenge as it will take at least two generations before the task of decommissioning the plants and decontamination of the surrounding areas are completed. There has been a 20-kilometer “restricted zone established around the damaged plants. Most housing loss is due to tsunami, thus causing a need to decide where and how to relocate in safer areas in the region.

New Zealand faces a dual challenge.  The Canterbury district experienced a series of earthquakes of large size and thousands of aftershocks over a nine-month period. The accumulation of quakes kept damaging more buildings and caused extensive soil deformation (liquefaction and lateral spread) over large areas of the central city and its eastern suburbs. This has resulted in half of all the buildings in the central business district of Christchurch (the nation’s second largest city) to be demolished, and the city’s landmark building; the Christchurch Anglican Cathedral scheduled to be torn down.  Outside the city’s central business district the soil deformation is so extensive that over 7,000 houses have been declared non-repairable and will be purchased by the central government.

Chile faces a challenge of reconstruction of many cities along its coast and also in the interior. In the interior the challenges are replacement of the thousands of abode buildings and finding enough land that can be supplied with infrastructure services.  The third challenge is restoration of the many historic buildings.  Chile also faces a challenge in rebuilding 220,000 destroyed and damages houses and resettling the survivors living in temporary villages (known as Aldeas).

In all these countries an assessment of what did work well is clear.  Overall, when built to modern codes, mid-rise buildings have performed well against earthquakes, with a few notable exceptions in Christ Church NZ and Concepción, Chile.  New Zealand uses a performance code where a building needs to be above the 34% structural standard to remain in use.

This is the period where a discussion of who does the recovery planning occurs. It includes issues of what to do, how to do it, who pays, what standards need to be applied, what are the principles of recovery, and who benefits from it.

The question does the planning is tied to some fundamental relationship between the central government and the local community (the survivors and their local governments).  In multi-locational events that include many cities and towns this can be a complex discussion. The comparative data in Table 2 speaks to this point in terms of the very large number of impacted cities Chile and Japan. 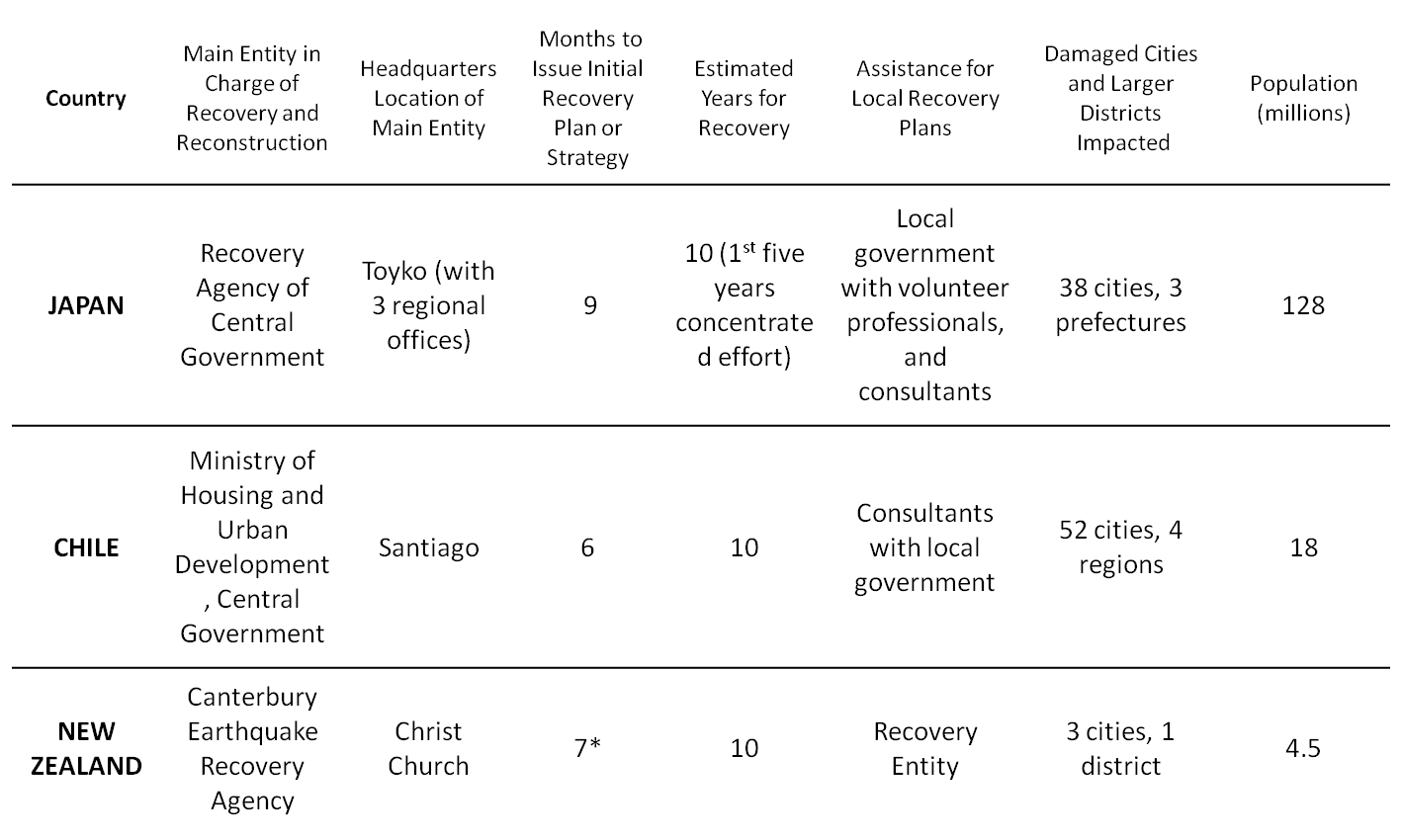 Chile and Japan used community plans as a step for initial dialogue with cities.  The Chilean government provided funds and consulting support for two regional effort to create municipal recovery plans. One effort was in the BioBio region where the regional governor facilitated the design of 18 master plans for cities. These plans, developed under the guidance of regional staff and consultants worked with the local people to create a vision for reconstruction and identified the most important projects and areas that needed to be addressed.  The plans however are not legal or binding documents.   The second Chilean plan effort provided funding for 27 recovery plans to cities in O’Higgins and Maule conducted with the assistance of a multidisciplinary team from the  Pontificia Universidad Catolica de Chile. (PUC).  Coastal plans and inland plans were developed along with extensive analysis of the communities geo-tecnical status.

In Japan, all cities in the impacted Miyagi and Iwate prefectures, along with other prefectures developed their own plans within 6 months of 3/11. There was no central government oversight in the plan making process. The prefecture of Fukushima where the nuclear accident occurred completed it plan 9 month after 3/11 and some of the cities in the prefecture have no plans (these are mostly located within the 20 mile restricted zone around the nuclear plants). The central governments Basic Guidelines for Recovery issued 4 months after 3/11support a model that places the project planning at the municipal level and the project funding at the ministerial level. Overall the plans call for: ensuring safety, rebuilding lives, and expansion of technology and natural resource based industry. Some basic land use proposals are proposed, and these are built around which risk avoidance strategy is chosen.

In New Zealand, the dialogue has taken a different form. The central government created the Canterbury Earthquake Recovery Agency (CERA) with extensive powers to conduct the recovery planning for the district.  The authority is located and operates from Christchurch. Christchurch, the main city government, was tasked with developing only a Center Business District (CBD) Recovery Plan. The city of Christchurch ran an extensive plan making process for the central city plan, employing an urban design consultant from Europe (Gehl Architects), and a complete series of community workshops and input sessions that yielded 104,000 suggestions.  This plan was not adopted by the Christchurch City Council, but was sent to the central government earthquake minister for review.

Plans become reality when they are implemented.  What has happened in Japan and New Zealand after 1 year and after two years in Chile?

Among the actions taken in Chile are:  rapid establishment of recovery funding, the housing subsidy program, the planning efforts, and assistance to the fishing areas.  The model used for housing reconstruction involves subsidies to low and modest income people who lost homes, with the construction being done by the private sector. Local government is charged with being the gatekeeper for where to build, and also is the entity responsive for determining if the site is safe and can obtain needed infrastructure services.  At the end of the first year 128,000 subsidies had been given, and by the end of the year two, nearly all were awarded.

During the one year since 3/11 Japan has been faced with stabilizing a nuclear accident (a continuing task), building 70,000 units of temporary houses, making new estimates of its earthquake predication and tsunami models, and committing to US$135 billion of recovery aid. The first round of funding to municipalities was completed.  The major areas included 45% going to housing related projects, 17% to land relation project, and 11% to economic revitalization.

New Zealand established a recovery agency, and the national insurance commission repaired 3,000 homes, decided to buy 7,000 houses in soil deformed areas, lost half of all buildings in the central business district to demolition and created a central city recovery plan.  The nearly universal seismic insurance program operated by the central government addresses most housing need and infrastructure reconstruction plans are almost complete.